Tom Petty and The Heartbreakers Crank Out On Hypnotic Eye

I was a senior in high school when Kid Leo from Cleveland’s iconic flagship radio station WMMS queued up some songs from a new band hailing out of Gainesville, Florida.  Little did I fathom that some thirty-eight years later I would be eagerly awaiting the release of Hypnotic Eye from Tom Petty and The Heartbreakers … with the exception I would be buying the album on vinyl.

Tell pops to dig out that turntable stored in the basement or head down to your local used record store and find copies of the self-titled debut and You’re Gonna Get It.  Listen to the jangly guitar riffs and energy packed into those tracks, which continue to be some of my go-to selections whenever I walk into a watering hole with a jukebox.  Those two albums along with Damn The Torpedoes had songs that flowed through my hyperdrive party mix cassette tapes back on 31 East 16th Street while attending The Ohio State University.  Although you may have a different favorite Tom Petty record, either as a band or a solo artist, it’s import to start at the beginning with the foundation of their catalog.  When bootlegs were once golden, a copy of the band recorded live in Boston circa 1978 for The King Biscuit Flower Hour is still one of my most cherished acquisitions which included an encore of “Shout”, “I Fought The Law”, Route 66”, and “I’m A King Bee”.

Inducted into the Rock and Roll Hall of Fame in 2002, this band is still bringing it strong and deserves being mentioned as maybe TBDBITL on the concert circuit.  Petty out front on lead vocals and guitar is backed by two perennial all-star players in lead guitarist Mike Campbell and keyboardist Benmont Tench.  The rhythm section is handled by the legendary Ron Blair on the bass and percussionist Steve Ferrone.  Multi-instrumentalist Scott Thurston, who joined the band in 1991, adds additional punch and harmonies.  Their storied timeline includes playing the Musicians United for Safe Energy (No Nukes) and Live Aid events, backing Bob Dylan on tour, and being the half time show at Super Bowl XLII.  Petty was the junior member of the Traveling Wilburys that featured Dylan, George Harrison, Roy Orbison, and Jeff Lynne.  Petty also hosts a Sirius/XM channel called “Buried Treasure” playing cuts from his personal record collection that was a unique concept when it started back in 2005. 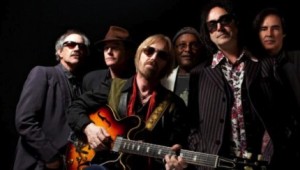 From the opening fuzz distorted chords of “American Dream Plan B” exclaiming “fighting till I get it right”, Petty has penned eleven engaging tracks that are social commentaries with a raw, blazing soundtrack. The next song “Fault Lines”, co-written with Campbell, cranks the beat to double warp speed as the narrator talks about his own personal fault lines.  Petty asks you to look down into your soul on “Red River” and leaving the past behind in “All You Can Carry”.  A little southern fried rock ‘n roll gives flavor to “Power Drunk” as does the Delta blues of “Burnt Out Town”.  Two numbers that bring it down a few notches are “Full Grown Boy” and the beautifully written “Sins of My Youth”.  “Forgotten Man” adds a little something old with a tip of the hat to a familiar opening riff reminiscent of the early days as does “U Get Me High” with some of those great overlapping vocal harmonies.  The closing number, “Shadow People”  times out at six minutes and forty-three seconds to let the entire ensemble stand out individually on a real bluesy slow burner.

Like the band, the new record Hypnotic Eye spans generations and will be savored by audiophiles of all ages.  That’s what I call a real feel good moment.