Random Notes: Catching Up with Record Reviews, Concert Previews, and the CYO 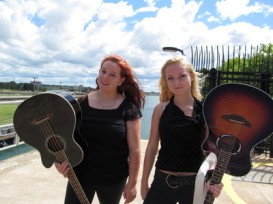 So this week my liner notes will be a hodgepodge of musical components that have been piling up on my “to do” list.  The only place start is … last night … 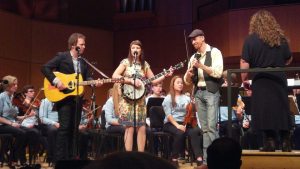 Live from the CSU Waetjen Auditorium, the Contemporary Youth Orchestra under the musical direction of Liza Grossman performed with fourteen singer/songwriters in a very unique program titled My Gift is My Song.  The eclectic mix of artists each performed two of their original compositions backed by a full orchestration that were especially arraigned by Eden Rayz and Derek Snyder.  The youth orchestra spent five weeks learning the twenty-eight songs and sounded beautiful accompanying the vocalist.  Of the sixty folks that originally submitted material to be included, Brent Kirby made the cut with “Standing in Hallways” and “Spot Where I Stand”  and then joined fellow band mates Laurie Michelle Caner and Ed Caner of Hey Mavis who closed out the show with “Say Hello to Paris” and Red Wine”.   Other veterans of the music scene played the second set with Tracy Marie, Conya Doss,Monique Vasames along with the group Big Ship which consisted of Michael Rotman, Dreadlock Dave, and Carlos Jones playing songs from a new children’s album project.  The first set had some exceptional local young talent including Christian Watson, Keifer Wiley, Garrett Cyr, Jeffery Gaiser, Jordan Lawson, and Praxton Smith otherwise known as Zxari. But the one artists that blew me away was eighteen years young Missy Zenker who performed “Look How Far” and “Momma I Might Love Him” with her sixteen year old sister Chelsea Zenker.  Hailing from Sault Saint Marie, Michigan, the duo’s songwriting and stage presence had my ears perked up that I was moved to download several songs from their ReverbNation web page; a very unprecedented move by this audiophile.  The next CYO show will be held on Friday, May 17th with special guest artist bassist Bootsy Collins from Parliament/Funkadelic.

David Mayfield will be returning from Nashville for some home cooking and a special CD Release Party at The Kent Stage on Saturday, April 4th performing songs from his second album Good Man Down.  Recording and touring as The David Mayfield Parade, the self-produced and Kickstarter backed project was partially recorded at the famed RCA Studio B and The Quonset Hut in Music City along with Suma Recording in Painesville.   Special guests on the some of the album’s twelve tracks include Mayfield’s friends Seth Avett and Dierks Bently.  If you haven’t witnessed a David Mayfield show, then be prepared for full a variety performance from the talented musician.  Other Americana shows on the horizon at The Kent Stage include the lovely Rita Coolidge who will make an appearance on March 24th.  The Beachland Ballroom has a slew of top headliners making a tour stop including Todd Snider on March 20th, Ryan Bingham with HoneyHoney on March 24th, and Alejandro Escovedo & The Sensitive Boys on March 26th.

Most of the new music I sample is done while driving in my car during the hour daily commute I make to my day job and then back home.  Two relatively new artists I have picked up on are Samantha Crain and Angel Snow who were featured on the syndicated radio program From The Living Room to The Loft.  Snow originally hails from Chickamauga, Georgia and late last year released her self-titled record that was produced by song collaborator Viktor Krauss.  Now residing in East Nashville, Snow will make you think Joni Mitchell with her beautiful voice and song writing imagery. “When I met Alison I knew that something was about to happen in my life,”Snow recalls. “The stars aligned in one afternoon, and I met her at the home of a mutual friend. I gave her a CD and she asked me to come to her house the next day. She made me realize that better things were in store for me. It was more than I could have ever hoped for. She felt like her brother Viktor and I would have cool creative chemistry. She was right on, because a week later Vik and I wrote the song ‘Lie Awake’ on our first meeting. And that song ended up on Alison Krauss and Union Station’s latest record.”

Kid Face is the third release from Shawnee, Oklahoma’s Samantha Crain and another talented artist coming out of the Sooner state.  She hooks the listener immediately with the first song “Never Going Back” and will have you falling in love with her eleven track record with every play.  “The common element of these songs is me” explains Crain.  “I’m the narrator of all of them. This is the first record of mine that’s completely autobiographical. It’s the most personal record I’ve written, a musical journal of my experiences—things that have happened to me as I traveled and my thoughts about specific situations.” Produced by John Vanderslice on the Ramseur Records label, Crain describes the hopes and dreams of blue collar America from the prospective of a self-reliant young woman growing up with a Choctaw Indian heritage.  “Sometimes All the Time” along with the title track are a few of the songs you will want to add to your mp3 jukebox so that you can have Crain’s music with you wherever you travel.