The Smoking Flowers Are Blazing With The Release of 2 Guns

Continuing the thread from last week’s Liner Notes, the diversity of music coming out of Nashville is beyond the “Country & Western” moniker the of the town’s long standing reputation.  Much of the creativeness is being brewed in an area called East Nashville, an eclectic, artsy area on the other side of the Cumberland River attracting young urban professionals, liberal minds, visual artists, and many musicians.  Crawling through the local hangouts around the five points area will have you sharing a pint with more than a few musicians and songwriters.  Pick your poison with Red Door, 5 Spot, or 3 Crows where I met Scott Collins a few years back while doing damage after the last night of Americana Music Association showcases.  Sitting amongst Mojo Nixon and Todd Snyder, it was truly the friendships you meet along the way that are a very important part of being an audiophile and passionate music lover.  Scott along with his lovely wife Kim Collins resides in the hipster neighborhood and together they are The Smoking Flowers who just released a brand new record called 2 Guns. 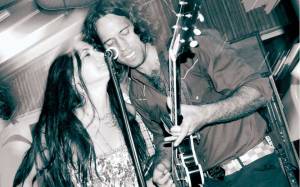 The couple fell in love at first sight, in a bar of course, when Scott came to Nashville in 1998 looking for a job at a music venue called 12th & Porter.  Kim hired him on the spot, and after one date … yadda, yadda, yadda … they’ve been married for 14 years.  Their sound is a mix of rock, blues, folk, with a slice of punk attitude.  Kim sums it up by calling their sound “Southern Gothic Folk”.  The two played and toured together for several years in an edgy alt-country band, Pale Blue Dot, before they wrote their first song together, called “Someday.” Out of that, came The Smoking Flowers and their debut release Sweet as Port in 2008.

It only took four days for the pair to record the initial tracks for their sophomore effort, mostly live on first take.  But the recordings had to be put on hold after Kim was diagnosed with breast cancer early last year.  Kim went on a diet of 100% raw food and holistic medical treatments in order to avoid chemotherapy.  After a year of alternative treatments, her cancer went into remission.  The duo eventually headed west on a road trip with destination unknown.  They found their way onto the original dirt road of Route 66 in the Arizona desert and came upon the surreal ghost town of 2 Guns.  The cover photo of the album was taken by timer from the hood of their car.

Produced and engineered by Adam Landry, the former touring guitar player with Ray LaMontagne adds his notable chords to an already unique blend of thirteen tracks.  The album was recorded analog to 1″ 8 track at Landry’s Playground Sound studio in Sylvan Park located on the west end of town.   Kim plays accordion, acoustic guitar, drums, mandolin, harmonica, and tambourine with sensual vocals while Scott rips both acoustic and electric guitar playing with a hard edge vocal harmony. The compilation of songs tells the tale of adventure of a couple who eats, lives, writes, plays, and loves life together.

My formula for an opening number needs to reel you in and this record grabs you by the scalp with Kim and Scott trading vocals on the rocker single “Spark & Fire”.  The flow into an upbeat more acoustic “Golden State” is as smooth as bourbon.  For those that are falling in love with the two piece Americana outfits, “Young & Mind” and “Twilight” channels some of that raw rootsy sound with a stripped down drum toe tapper.  A beautiful slow dance ballad “Low” highlights the couples vocals and harmonies.   One character you might not want to meet is “The Juggler”, although the song’s chorus anthem will have you singing along with the band.  Kim shines on the haunting “Something I Said” which landed a spot on the ABC television show Revenge.   Punk meets The Grand Pappy with “White Flags” and “Pistol Whip” with Scott on lead vocals and crazy guitar playing.  The duo blends in some  olde tyme country with a new timeless classics titled “El Matador” and “The Wrong Kind of Man”.  Two possible radio singles could be “Heart Darker” and the albums closer “66” that should find a spot in your personal jukebox.

I must end this week’s Liner Notes with another story, this time from last year’s Nashville visit.  Instead of closing out the night at one of the showcases, my partner in crime Dale Elwell and I ventured off-grid to see Scott with one of his off-shoot bands called The Buddies who just happened to be playing a gig at a place called the Zombie Shop two blocks away.  What we didn’t know is that we would be walking into motorcycle repair shop converted into a Nashville hipster speakeasy complete with television Duck Hunt, expanding arts lighting, props, and a fridge with two buck PBR’s.  With people throwing empty cans at his Chicago band mates and duet partner/wife Kim on drums, this was truly one night to remember by a couple of hooligans from Ohio.  Afterwards, we spent time catching up with Scott & Kim and fostering friendships.   We all have great stories to share with the music that we love, and maybe those are the ties that bind all of us together here on this web site.

For more information on The Smoking Flowers including the latest tour schedule, please click onto their website  www.thesmokingflowers.com or the band’s Facebook page. The video for “Something I Said”, the band’s first official single, can be viewed on YouTube.