With many musical events on the calendar, it’s hard to give you the lowdown on just one.  So it’s with great excitement and pleasure to let all my little hipsters know that Alejandro Escovedo will be making two Northeast Ohio visits that should be on your radar.

For those not familiar with his work, the singer/songwriter from Austin, Texas has been on the music scene since the late seventies as a guitarist with punk band The Nuns. The road took Escovedo to San Francisco and New York City to find fame and fortune before returning home to play with alt-country roots rocker bands Rank & File and The True Believers. By 1992, Escovedo finally found his calling as he embarked on a solo career with albums Gravity and Thirteen Years which includes the poetic “Baby’s Got New Plans”.  The release of six more albums made Escovedo the critic’s darling building a fan base and becoming an influence on the next generation of musicians.   He fell critically ill from hepatitis-C in 2003 and like so many musicians who didn’t have medical insurance, incurred a stack of medical bills.  Friends and admirers organized benefit shows to help the songwriter including the album Por Vida: A Tribute to the Songs of Alejandro Escovedo.  By 2005, he was back recording Room of Songs and The Boxing Mirror after being declared disease free.

A change in management to the legendary Jon Landau and Barbara Carr in 2008 precluded the release of Real Animal, the album that put him on my radar.  Co-written with Chuck Prophet, this epic release began a trilogy of albums produced by Tony Visconti.  Highlights include radio singles “Sister Lost Soul” and “Always A Friend” that was also released as a live recording with Bruce Springsteen.  The troubadour’s follow-up efforts Street Songs of Love and Big Station continued his unique blend of rock and roll with a dash of cowpunk.

The Kent Stage will host Alejandro Escovedo backed by former R.E.M guitarist Peter Buck and his band on February 25th.  For those of you who missed Joseph Arthur with another R.E.M. alum Mike Mills in Akron before Thanksgiving, this will be one of those rare opportunities that music fans here are lucky to get.  Buck will be opening the show as a 4-piece unit with Bill Rieflin (drums), Scott McCaughey (bass), and Kurt Bloch (guitar).  Also joining the headliner that night will be violinist Susan Voelz.   Escovedo and his regular backing band The Sensitive Boys will headline The Beachland Ballroom on April 6th with the lovely Amy Cook opening.  Cook, who also hails from Austin, took home the hardware in 2012 with Summer Skin receiving my Album of the Year Award so make it a point to catch the opening act. 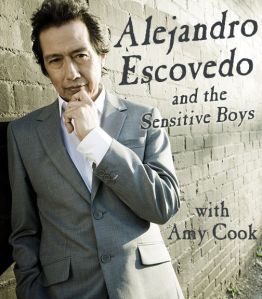 Alejandro Escovedo will be on tour through March 1st with Peter Buck and will take a break before hitting the road again March 27th with The Sensitive Boys.  For those attending the Ohio shows, I’ll be hanging around both venues, so if you see me, feel free to say hey.  I’m always appreciative of your support and fostering friendships with those that share a common thread.