Living the dream.  At times you mention it with satire, but when you can own it and truly believe that phrase then its euphoria.  We should be so lucky to know Hilary Scott, the one with one “L”, and hear her beautiful newly released album Freight Train Love.  She indeed is living the dream which is getting ready to go farther than she ever imagined.  Every town it seems has a favorite local performing artist.  I didn’t know about this St. Louis based singer/songwriter who has recorded ten other albums over the last dozen years until a copy of her album from KG Music Press showed up in my mailbox.  It sat until last week on a cold, rainy afternoon I decided to pop her record into my car’s CD changer for the commute home and it was as if the clouds parted for a ray of sunshine. 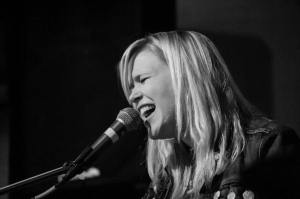 Originally from Washington State, it’s been a long and winding road for Hilary since her brother Scott died of complications due to epilepsy in 1998.  She adopted his first name as her performance last name so that his spirit would be with her on this musical journey.  She has forged ahead as a hard working indie artist garnering a loyal fan base with non-stop touring around the world.  The sacrifices she made have more than paid dividends with the positive and inspirational feedback she receives from town to town.  A successful IndieGoGo campaign earlier this year was the foundation to hopefully take her career to the next level.  The Belltown Records artist put all her chips on the table when she headed to Los Angeles to record at Ultratone Studios with owner Johnny Lee Schell providing the engineering and mixing.  Acclaimed songwriter Michael O’Neill not only produced the new record, but he drew from his rolodex of players like Bob Glaub (bass), Tony Braunagal (drums), and  Mike Finnigan (keyboards) to accompany Hilary in the studio.  Schell laid down some beautiful guitar work throughout the album and Hilary’s longtime collaborator A J Gennaro offered additional percussion.  The main ingredient is, of course, Hilary Scott and her passionate, sweet, and sultry vocals that bleed throughout the record.

An album has to grab the listener and draw them in, and Hilary opens Freight Train Love with the relationship title track that has Hilary’s gorgeous vocals layered with Finnegan’s beautiful Hammond B3 and backing vocals from Julie Delgado. Three songs were brought over from her vinyl-only 2013 EP release Flowers on Mars which garnered the 2014 Americana/Folk Album of the Year from the National Traditional Country Music Association.  Hilary re-recorded the catchy radio single “Help”, the Laurel Canyon flavored “Get Your Love” with some classic old school guitar riffs from Schell, and the toe-tapping “Flowers on Mars” to connect with a larger audience.  Hilary penned most of the music and a portion of the words to the title track along with most of the words to the lovely ballad “Diamonds” and finished them with help from O’Neill.  The Scott/O’Neill songwriting partnership cranked out two great songs during the recording sessions.  One is the storytelling “Whiskey Bottle Dry” full of drinking, love, and heartache.  The other is the closing country rocker “Didn’t Make it Alive”.  O’Neill dialed up his friend Kevin Fisher, another established songwriter, to include his nice little pop number “If You Don’t Love Me” as a duet with Hilary.  Fisher let the starlet shine in the spotlight with her take on his torch song “Losing You” that Hilary describes as “the best heartbreak song I’ve just about ever heard”.  A soulful, bluesy interpretation by Hilary was given to the classic Neil Young song “Lotta Love” that Glaub played bass on the Nicolette Larson crossover hit single version back in 1978.

Hilary Scott left Los Angeles with a fantastic record of ten solid tracks and now begins the hard work of fostering new fans and awareness with the street release of Freight Train Love.  But sometimes you can attribute it to a little luck and fate that the music falls into the right hands at the right time. From everything I’ve heard there might be a few more awards for the girl with one “L” before the year ends; including mine.