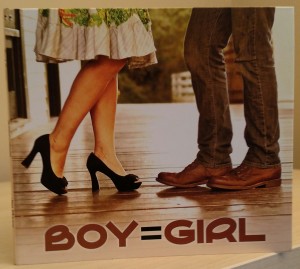 There are times when I feel like Lt. John J. Dunbar, stationed at my outpost in the beautiful landscape of the Cuyahoga Valley, reporting on the Americana movement and experience, touching the great folks who call this land Ohio.  There is a rich history of music in these parts and at times these musicians come together to form a new tributary of sound that channels their roots and flavor into something breathtaking beautiful.  So it is with Jen Maurer and Paul Kovac, who partnered their respective talents into the duo BOY=GIRL and just released their debut self-titled album. 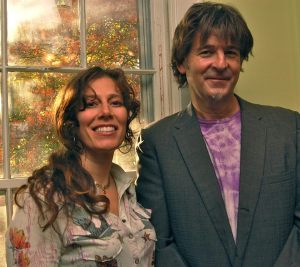 Paul Kovac is a working musician and leader of a town & country band called Hillbilly Idol since 1991.  He has been crafting his bluegrass skills all his adult life and teaches around the country at music camps, most notably at the Swannanoa Gathering in Asheville since 1995.  Also a full time musician, Jen Maurer was once a member of The Rhondas which also had featured Laureen Michelle Caner now with Hey Mavis and Sarah Benn who now fronts Shivering Timbers.  Maurer leads a Pardi-Gras band called Mo’ Mojo which has been playing to audiences locally and internationally since 1995.  Jen saw Paul perform some twenty-six years ago during the Kent State Folk Festival and he became a major influence on her musical career.  Sometime around 2011, the two friends finally decided to begin performing together as a side project. 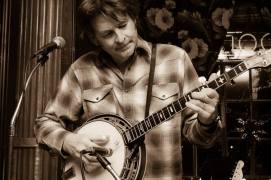 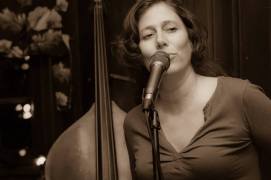 Their sweet harmony vocals and multi-instrumental skills meshed to give them that unique spark found in folks like Welch/Rawlings, Chambers/Nicholson, and Buddy & Julie Miller.  The pair began by playing traditional songs with contemporary bent and contemporary songs with a traditional roots feel.  “We started to show each other some songs each of us had written and tweaked them to fit the duo format.” explains Kovac. “Now when I write songs, I do so with Jen in mind. I can hear her voice or hear how she might approach the song.”  In this duo, Jen plays the upright and electric bass along with acoustic guitar.  Paul plays the 5-string banjo and both electric and acoustic guitar.  “The glue for the songs is the harmony vocals” says Maurer.  “They are what gives us our unique sound and allow us to move around instrumentally and style wise.”

The 16 song self-produced debut record was recorded at Survival Kit in Cleveland.  The record is evenly split with five songs apiece written by Kovac and Maurer and two co-writes.  Kicking off with a gritty Appalachian roots duet called “Blue Modal #2”, the Kovac/Maurer formula infuses the listener with an array of musical styles that blend together like a nice pot of gumbo.  Highlights include the dark spaghetti western twang of “Back In Your Arms Again”, a sweet slow dance country crooner “Isn’t It Funny”, and the Texas swing of “I Did, I Do, I Will” with the playful bouncing back and forth vocals along with guest player  Denny Jones on fiddle.  “Little Baby Rocks & Cries” offers up a mostly a cappella number while “Wish I Was On That Train” is a jazzy blues toe-tapper with hints of Michelle Shocked.  An old school country ballad “What If I Fall” features Pete Freeman on pedal steel.  Maurer and Kovac offer up their rendition of the Amy Winehouse “Back to Black”, one of their most requested covers, and a nice banjo twist on “This Ol’ Cowgirl” from The Marshall Tucker Band with Gary Naherny on drums. The duo make their own version of the obscure Bob Dylan / Danny O’Keefe tune “Well, Well, Well” as well as the traditional “Lonesome Rueben’s Train” which rounds out this stellar record. 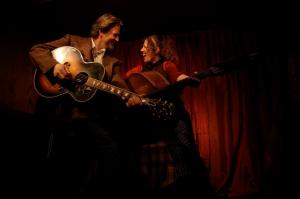 With Maurer traveling abroad to central and South America with Mo’ Mojo, BOY=GIRL unfortunately won’t be playing out until the end of February promoting the new album.  But this gives you time to get familiar with the songs and make plans to catch them when they do return to the stage.  To get a copy of the record and tour dates, visit boyequalsgirl.com.