Gotta Groove Records are stamped Made In Cleveland

A large cluster of industrial buildings that still remain on Cleveland’s near east side were once home to iron foundries, motors, tube, metals and machine works.  Named after the once thriving Tyler Elevator Company, the area now is the hub to a cluster of small businesses referred to as Tyler Village located at East 36th Street and Superior Avenue.  On the ground floor of Building 42, Gotta Groove Records has channeled the manufacturing past into a thriving vinyl record pressing facility.

Gotta Groove Records began operations in 2009 and was the first new pressing plant to open in the United States in decades. That took some foresight by owner Vince Slusarz, after a twenty-five year career as in-house council for Kinetico Water Systems, to start a manufacturing business with a media that had seen its better days over two decades ago.  Slusarz acquired some late ‘70’s equipment from Dynamic Sun in Newark, NJ and brought in some staffing with pressing plant experience, but it was mostly trial and error learning the business.  Through the course of their first five years of operations, it became the first completely vertically integrated vinyl manufacturing and distribution operation anywhere in the world with double digit growth due to the company’s commitment to quality.  Gotta Groove is the only pressing plant where every step of the manufacturing process (lacquers, plating, pressing, label/sleeve/jacket printing, download hosting); as well as a crowdfunding platform, wholesale distribution services, and consumer-direct fulfillment are provided by a single company. 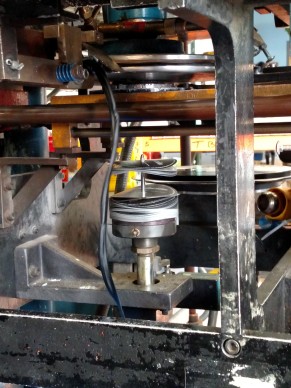 Gotta Groove focused on independent self-funding artist and small labels to grow their business model.  Most projects are completed within four months and the company cranks out close to 1,700 per year for their clients.  The manufacturing process encompasses 2 shifts and 30 employees using 1,800 pounds of specially formulated black polyvinyl chloride every two days.  Most production is done on standard weight automatic presses, but the manufacturing floor also includes a semi-automatic, 7”, and 180 gram machines.  Where possible, they recycle or reuse materials involved in each facet of the operation as excess trim falls into barrels.  Gotta Groove contributes a portion of their profits to the Carbon Fund to help offset the impact that the company has on the environment.  About 80% of the lacquers used in the production process are cut by master craftsman Clint Holley of Well Made Music locally in Cleveland.

Colored vinyl is used to create one-of-a-kind platters of art that have been infused with such things as shredded cash, glitter, coffee grounds, cassette tape, exploding labels, and silk screened non-playing side four records.  A who’s who of Americana vinyl was made in Cleveland including Andrew Combs, Aoife O’Donovan, Chuck Prophet, Aubrie Sellers, Parker Millsap, Dave Alvin, The Mavericks, Blackfoot Gypsies, along with the Bloodshot Records catalog and many Record Store Day projects.  The production process takes about 40 seconds to make a vinyl Lp, but the quality control check points used throughout the production process is the difference to bring this unique listening experience to audiophiles around the world.   Gotta Groove stations one quality control employee per every two pressing machines listening to approximately every 25th record off the press during every shift.  Every record is sleeved by a human being as a final visual quality checkpoint.

So next time you purchase a new release from the local independent record store, check the fine print of the liner notes.  You might be holding a souvenir manufactured from my home base of Northeast Ohio.   For more on this region, check out Believeland – A roots music renaissance simmers just under the surface in Northeast Ohio in the Spring Edition of No Depression magazine.