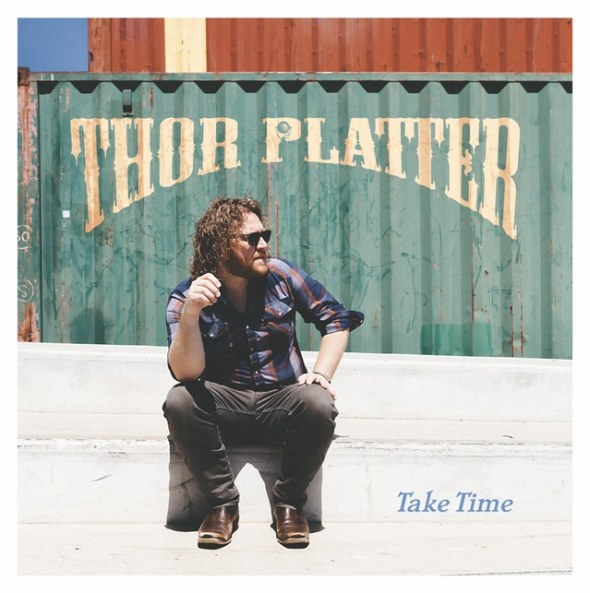 Sometimes you need to just start over.  It’s a decision process that ranks right up there with one of the hardest things to do in life.  For Thor Platter, his new record release titled Take Time embraces the trials and tribulations of a songwriter who decided that going acoustic instead of electric would be the correct path.  Platter chose wisely with a beautiful record that echoes of gone but not forgotten outlaw country royalty.

Transplanted to Cleveland by way of Buffalo nine years ago, Platter has become an ambassador of the Northeast Ohio music scene.  A full time working musician who has embraced the networking culture, Platter has been a key player to the positive camaraderie among fellow players and the creation of a great support system.  Platter began doing gigs at the renowned local brewery Fatheads which parlayed into more connections and other lager infused events.  Coupled with previous releases Looking For Sunshine (2013) and Long Road Ahead (2015), Platter built a following from neighboring counties to across state lines. He was one of a handful of songwriters featured in Believeland – A Roots Music Renaissance Simmers Just Under The Surface in Northeast Ohio published in the Spring 2017 edition of No Depression magazine.  Hard work and perseverance paid off with a very successful Kickstarter campaign for the recording and distribution of Take Time on compact disc and locally crafted vinyl from Gotta Groove Records.

Platter had previously been headlining an electric band with pedal steel when he first began recording a new album a few years ago.  But over the past year, he has surrounded himself with two acclaimed teachers of the Americana roots craft in Paul Lewis on bass and Paul Kovac on banjo playing as a trio.  This led to a friendship with songwriter/musician/producer David Mayfield who moved back to his old stomping grounds from Nashville and occasionally sits in with Kovac’s other bands Hillbilly Idol or Clear Fork Bluegrass Quartet.  Mayfield took time to review Platter’s songbook and there was just something right about the vibe coming from David’s former studio Tiger Spa (Mayfield recently opened a new facility called Sweetside Recording Company).  With the trio playing shows for several months, the new album was tracked in just six sessions with few overdubs to stay true to their arraignments and live recording process.

Take Time captures your attention with the opening number “Destined”, a song Platter wrote when he first moved to Cleveland about a young man’s dreams.  Lifetime themes are spotlighted with “Fallout (Take Time)” which touches on friends who are going through dark times while “Open Up Your Heart” is trying to forget an old flame when dating someone new.  The beautiful “There For You” was written while living in Sheffield Lake after seeing a community hit by hard times and unemployment.  Harmonies and banjo picking highlight the bluegrass song  “Since I’ve Been Gone” when Platter revisited Buffalo as does a timeless acoustic ballad called “Gun Shy”.   Using a high end tuned guitar, Platter reminisces of the royal blue pouch of pipe tobacco lying on the dashboard of the family vehicle as an ode to his Father titled “Captain Black”.  Written almost fifteen years ago when his childhood girlfriend left for the big city of New York, “Come Home” has a happy ending.  The lone cover is a bluegrass version of “Tears Stained Eye” that offers a fresh take on the classic Son Volt song.  Every artist has had a miserable show to drive home from and a little weed helps get you through the night ride.  Tying that thought into once living on Pullman Avenue, that sets up the closing track as Mayfield layered instruments from an old band recording into a crashing finish for “Pullman’s Blues”.

The first of many road trips begin next week for Thor Platter including stops in Nashville, Buffalo, Rochester, and a hometown release party in Cleveland. Take Time is ready for delivery, so please keep your eyes and ears open for one of our finest troubadours.  As always …. click onto his link, read on, and tell a friend.