Americana With A Jewish Soul 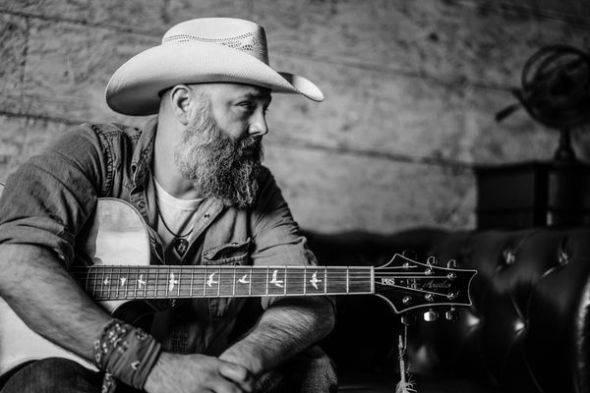 Finding yourself and finding happiness is something most people keep to themselves.  The search for religion and enlightenment is an even deeper journey that you may never come to appreciate until you’ve run out of time.  Sometimes though, it will hit you when you least expect it.  It happened to Joe Buchanan, and he’ll be visiting Akron from August 23-25 to share his unique personal story.

The wrinkle is Joe Buchanan makes Jewish Americana music. Raised in Texas, he couldn’t find much that he agreed with in what he was hearing in church despite a deep belief in a creator.  He bounced around congregations weekly trying to find a message that hit home.  He met April, who was raised by a Southern Baptist father and non-observant Jewish mother. Her mother taught her some basics about contemporary Jewish history, but Judaism always felt distant. When April met Joe, she also felt disconnected from any formal religion and decided to tag along with him exploring a wide-range of church services around Houston. They married in 1999, in a civil ceremony.

A 2011 visit to the Holocaust Museum in Washington, D.C. changed everything for them. The Buchanan’s spent hours at the museum, moving through exhibits about the rise of Nazism in Germany and the horrors of the Jewish genocide.  April stood outside the museum and told Joe that she wanted to learn more about Judaism. “You’ve been trying to figure out God for a long time,” she said. “I think I want to get in touch with my people’s faith.” Joe was surprised, but said he’d be open to trying Judaism out, too.  They were largely ignorant about the religion then.

Their family started down a path that would change everything.  They found a Conservative synagogue near their home with a congregation of around 130 families called Shaar Hashalom, headed by Rabbi Stuart Federow, a Reform-trained rabbi with an Orthodox background.  Joe would bring his guitar around the synagogue to play and Federow urged his new congregant to attend a group class for Jewish songwriters, called Song Leader Bootcamp.  The songwriting camp was his first exposure to the Jewish music world. He met cantors, rabbis and lay leaders from Conservative and Reform circles who were using music and song in prayer settings. He’d never seen anything like it before.  Judaism answered every spiritual question and brought an incredible amount of healing.  Joe started trying out his own music-infused prayer services and they became so popular that he began visiting other Texas synagogues to play. Now, Buchanan travels nearly every weekend to a different congregation, where he’ll play and also lead workshops sharing his story and invites questions. “We are going to struggle, exclaims Joe “that’s ok, we are not damaged goods by any means, and this is the life that matters because this is the one we’ve been given.”

Akron’s Beth El Congregation will be hosting Joe Buchanan with a series of events open to the community.  Friday August 23rd the synagogue will be hosting a Community Shabbat Dinner at 750 White Pond Dr beginning at 6:00PM, followed by Buchanan’s signature “Shabbat Americana” service at 7:00pm co-led with Beth El’s cantor, Matt Austerklein.  Following the service, Buchanan will share his story Choosing To Be Chosen: What Seekers Are Seeking.

There is no charge for those that just wish to attend the Shabbat service or talk.  Advance dinner tickets are $18 adults/$12 children 5-13 if purchased by August 16th through the Shaw JCC at www.shawjcc.org/shabbatdinner or in person.  The Community Shabbat Dinner is sponsored by Beth El, Shaw JCC, Ashe Sfard and Temple Israel congregations.  It is underwritten by the Jewish Community Board of Akron and with support from Rubber City Jews.

Shabbat morning services on Saturday, August 24th will feature Buchanan on guitar and will give the d’var torah highlighting his experiences singing to the US Military and reflecting on the spiritual lives and longings of Jewish servicemen.  A new song that Buchanan and Austerklein co-wrote for the weekend will be premiered during the service.

A Community Havdalah Service and concert will be held Saturday evening at Beth El beginning at 7:30pm. Joe Buchanan will be performing his unique brand of “Jewish Americana” spinning stories with songs and first listens to original songs that will appear on his upcoming album release Back From Babylon.  The evening is free to the public with a suggested donation of $10 at the door.

Besides the mentioned events, Buchanan will be performing for both the JCC Summer Camp and Lippman School  children during his weekend in Akron along with being interviewed on public radio station The Summit (91.3 and 90.7 FM) with Hazzan Matt.

Everyone can always use a feel good moment, so no matter what your avenue of faith may be, if your Judaism needs uplifted, or even if you have yet to find a connection to religion, think about attending one of Joe Buchanan’s scheduled appearances.