A Life Journey Through the Songs of Andrew Combs 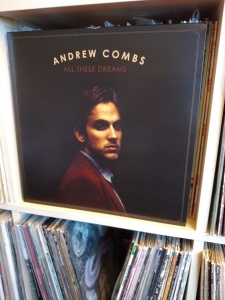 Finding out about new music is still best when hearing about it from friends or trusted sources.  As a writer, some of the under the radar singer/songwriters I uncover come to me old school via the above or hearing them on one of my favorite satellite radio channels.  Griffin House once referred to me as “the connector” and that is exactly what I try to accomplish for the usual suspects who read my stories and the gifted artists putting out exceptional work that needs to be heard.

Two years ago I was blown away from a band called Steelism playing outdoors at Nashville’s Grimey’s New & Preloved Music during their all day Americanarama VI event.  Lead guitarist Jeremy Fetzer just happened to be transplanted from North Canton, Ohio where I grew up and a new connection was made.  I’ve been following the progress of Fetzer and musical partner on pedal steel Spencer Cullum Jr’s unique sound since and was fortunate to make their record release party inside Grimey’s last fall for 615 To FAME.  Fetzer was beaming about this fellow Andrew Combs and how excited he was for his friend’s next record due out in the spring.  Last year I made a renaissance commitment to only buying vinyl Lp’s, so I kept tabs on Combs and waited until news broke of the release.  Trouble was, it was only available in Europe so Nashville made its way to Akron via Berlin and the LooseMusic label.  Persistence is a defining character for all vinylheads to find a record they covet and All These Dreams is paying dividends ten times over. 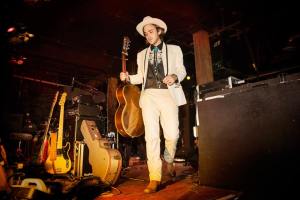 With the album designed by Jeremy and his lovely wife Beth Fetzer, the eleven song soundtrack has the warmth of a lush vintage 1970’s RCA Studio style recording beginning with the opening numbers “Rainy Day Song” and “Nothing To Loose”.  The sophomore release from Dallas native son Combs is a mixture of classic contemporary country with hints of Croce, Orbison, Springsteen, and Joel as the narrator takes the listener on a journey of love, sin and redemption.  Two examples are listening to Combs the storyteller in “Pearl” and the piano laced “In The Name of You” that this twenty-eight years young is the real deal.  Three other songs have hit single written all over them with the catchy “Foolin’”, “Long Gone Crazy”, and the title track able to hook you immediately.  Produced by Jordan Lehning and Skylar Wilson and recorded at The Casino by Eric Masse, Combs enlisted both Fetzer and Cullum Jr. along with Mike Rhine (bass), Ian Fitchuk (drums) and both producers on keyboards to form the core of the musicians.  Strings, accordion, and backing vocals from several folks including Angel Snow and Natalie Prass round out the sound on this timeless album.

Combs long and lonely quest to find the meaning in life is captured in the last three tracks beginning with the beautiful ballad “Slow Road To Jesus” where the writer laments “Chasing my troubles away/On the slow road to Jesus/Lord knows I’ll get there/Finally forget where I spent all my troubles someday”.  This is followed by the heartbreaker  “Month of Bad Habits” that has the entire musical cast cooking with gas while Combs sings “And now the wine goes down easy/And the sun’s coming up in a strangers motel room/it’s gonna take more than a month of bad habits/ To get over you”.  Closing out the album is a song about spirituality in a desolate area of the Osceola National Forest titled “Suwannee County” where “You’ll find heaven waiting around the bend”.

Andrew Combs will be on an extensive tour from now through the end of June including dates with Joe Pug.  If you see him listed in your local concert announcements, make an effort to hear this songwriter performing cuts from All These Dreams live on an intimate stage.  And hey, it will be a heck of a lot easier for you to buy his vinyl Lp than how I had to obtain one.

Thanks for following along and paying attention to the passion found within Minkin’s Music.