BRENT KIRBY TRIUMPS WITH PATIENCE WORTH 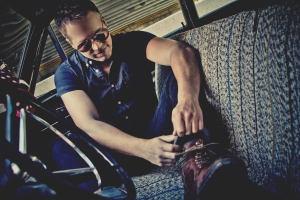 There are so many new releases lately from local singer/songwriters in the Cleveland/Akron/Kent area that the wealth of talent is once again overflowing the challis.  At the forefront of the charge is Brent Kirby, arguably the hardest working musician in these parts, who you can catch just about any day of the week performing around town. Kirby is back with a new backing band as Brent Kirby & His Luck will be releasing the long awaited Patience Worth album with a big shindig at Music Box Supper Club on Saturday, May 16th.

It’s been a long four years since his last release Coming Back To Life recorded with his former band of Americana Alt-Country brothers The Lost Fortunes. But for those not familiar with the working musician, Kirby still sees the fellas once per month when performing with the New Soft Shoe delving into the Gram Parsons songbook.  When not playing solo or accompanied by one or more of the usual suspects, Kirby can be seen playing rock and roll with another of his bands The Jack Fords, the Christmas holiday ensemble Ohio City Singers, and formally with the bluegrass group Hey Mavis.  Writing songs for all of the above with different styles of music was like Kirby trying to carry four suitcases at once. It was time for Brent Kirby to consolidate his songwriting craft and put a band together which not only could play his entire catalog, but be the beginning of something new.

Recorded this past January at River Junction Studios, Kirby chose Jim Stewart to engineer the project.  Stewart has been the hot hand many of the other local artists have been using in Cleveland.  Kirby found him to have a good ear and great communicator with understanding the vision Brent had for the album.  The self-produced record features Kirby’s longtime partner in crime Chris Hanna on piano and Hammond B3 organ.  Ben Nieves plays some wicked guitar while Kevin Johnson on bass and percussionist Travis Payton hold down the rhythm section. Additional players included drummer JJ Juliano, the gifted Ray Flanagan on guitar, and Russ Flanagan on Rhodes piano.  A few of the usual suspects that also help out were guitarist Andy Leach and “The Reverend” Al Moss on pedal steel.

Brent’s Father, Richard Kirby was a former high school band director for over 35 years in Oconomowoc, Wisconsin and has been somewhat of an unconscious influence on his son’s musical career.  Two songs on the new record called “Say That You Want Me To” and the big ballad “Easy To Be” include horns and strings arranged by the senior Kirby for the first time on one of his son’s recordings.  The Cold City Horns consisting of Jacob Wynne (trumpet), Brad Wagner (alto sax), and Nolan Plunkett (trombone) add a new sound to Kirby and blends well with Hanna’s keyboard wizardry. 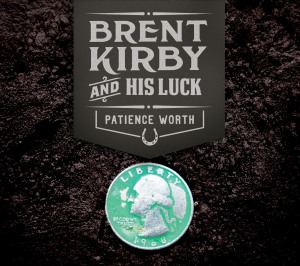 There is a backstory to Patience Worth as Kirby endured a divorce and move to a new place to call home.  Brent is a hands-on Father who takes great pride being able to raise his daughter and much of her spirit can be found within the compositions.  While on that long journey Kirby fostered a deeper friendship with a lovely young lady whom also was an inspiration for this new beginning.    His patience and support from friends was the strength that guided him through a rough patch of life.  As one of my friends once said, it could be you or me if a different coin was tossed and Kirby’s album art denotes a bit of that with one quarter in dirt and another surrounded by the growth of luscious green grass.  Brent says he came out of it a different person and that it was somewhat of a liberating experience.

Patience Worth kicks off with a catchy single titled “Our Town” that describes a pride of life of everyday, hardworking folks living in this lunch bucket town.  Nieves shines on guitar with several tracks as he and Hanna trade some crazy riffs during “Keep It Safe” and “I Can Make You”.  There is a tender side to Kirby’s songs which can be found on “Is The Truth” with Tara Hanish on cello and the lovely “If it Rains All Spring”.  Another song which should get some radio play is the up-tempo “Some of The Things” featuring Payton on the sticks.  A solid record throughout, one song that I truly immersed myself into was the jangly New Year’s song “Days Go By”.  Kirby bleeds with phrases like Made it through and still believe that things are going better or second verse Move on past this time, Press play and not rewind, or in the final stanza Amend the bruises on my heart, feeling right’s a brand new start that many listeners can relate to.  The last song on the soundtrack called “Sunsets Are Golder” is a beautiful love ballad of celebration and triumph featuring Hanna, Harnish, Moss, and Ariel Clayton on violin.  Here Kirby allows his torch song to peak with I will bend to meet you/Always stretch to reach you/Let you be who you should be. Nieves puts a nice little soft electric touch to close it out putting icing on the cake.  A nice blues rocker called “Girl I Love” Kirby co-wrote with Leach is a bonus track found on the CD that clocks in just under six minutes.  A vinyl Lp edition of Patience Worth is in the works to be released at a later date.

For those unable to make the release show celebration, visit Brent Kirby’s web page or follow him on Facebook for more performance dates in Northeast Ohio and abroad.