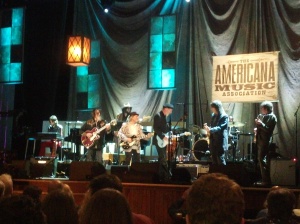 My favorite road trip is heading to Nashville for the Americana Music Association annual awards night, conference, and showcase events.  What’s not to like?  It’s a non-stop music quaalude that has become jam packed with events since the group began hosting this twang fest eleven years ago.  Once again, northeast Ohio was represented by this writer and partner-in-crime Dale Elwell as we navigated through local taverns, record stores, and southern culinary staples found on Broadway or off the grid.

The journey began at an alleged car rental location in Akron at 8:00AM where two air-heads high on Red Bull gave us the option of driving one of two vehicles on the premises … a Chevy HHR or a Nissan Qube.  We nixed the icebox on wheels and decided to see the USA in the Chevrolet.  After an easy drive, picking up our credentials, and checking into the hotel near Music Row, we made our way downtown to Broadway Brewhouse & Mojo where once again “Liver is Evil and it must be punished” for the first round of local ale Yazoo Dos Perros and some delicious fish tacos. Joining us was Dale’s cousin from Saint Louis Clarence Solar and his lovely wife Danute. 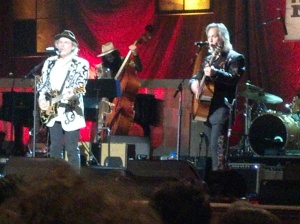 Opening night this year was the Honors & Awards show held at the mother church of country music, the historic Ryman Auditorium.  The lights dimmed as Darrell Scott, Buddy Miller, Don Was, Richard Thompson, Larry Campbell, Kenny Vaughan, Rami Jaffe-Keys, Brady Blade, and Lifetime Achievement Instrumentalist Award winner Booker T. Jones tore through a scorching version of the 1962 classic “Green Onions”.  From there, other musical highlights included The Punch Brothers performing in a semi-circle around two microphones, the roof-raising new emerging artist award winning Alabama Shakes, Lifetime Achievement For Songwriting award winner Thompson, and the husband and wife duo of Kasey Chambers and Shane Nicholson who traveled from Australia to part of the festivities.  The musical line-up included Tom T. Hall, Lee Ann Womack, Peter Cooper, Guy Clark, Robert Ellis, Sarah Jarosz, Jason Isbell performed his award winning “Alabama Pines”, Carolina Chocolate Drops, Hayes Carll, Deep Dark Woods with Kendal Carson, Justin Townes Earle, Buddy Miller and awards host Jim Lauderdale performed a song off their upcoming record, The Mavericks featuring Raul Malo, and concluding with Lifetime Achievement for Performing winner Bonnie Raitt playing on stage with John Hiatt.  Other winners that did not perform were producers Tamara Saviano and Shawn Camp who won album of the year for This One’s For Him: A Tribute to Guy Clark, The Civil Wars for duo/group of the year, Gillian Welch for artist of the year, and Welch’s partner Dave Rawlings for instrumentalist of the year award.  The encore brought everyone to the stage along with Sam Bush, Emmylou Harris, Amy Helm and Teresa Williams for a tribute to the late Levon Helm with “The Weight”.  The night was still forever young as we headed to the first night of showcases starting at ten-thirty.  There are six clubs at four locations holding nightly intimate shows, but there was no way we would miss an opportunity to hear Kasey Chambers & Shane Nicolson headlining with the talented opening act The Carper Family at The Station Inn. 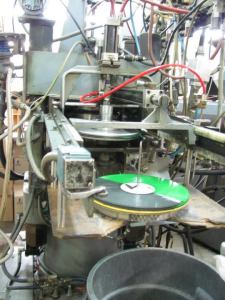 The only cure for day one was lots of Bongo Java and a “Bagel Bomb” breakfast at Fido in the Hillsboro Village.  The second order of business was to see Jay Millar, Director of Marketing at United Record Pressing, who invited me to take a special two hour morning tour.  Founded in 1949 and at their current location since 1962, they are the largest manufacturer of vinyl albums currently in the USA.  In the early years, the plant primarily cut 7” singles for Mowtown and The Beatles.  With the south being what it was in that time, the Mowtown artists would stay upstairs in a suite with kitchen that gave me flashbacks to my childhood home.  Much of the manufacturing equipment is vintage ‘50’s technology, so when something breaks down, the company has to make their own replacement parts.  The machines apply 6,000 pounds of pressure onto a vinyl biscuit (looks like a thick hockey puck) that flattens it out into a vinyl masterpiece in a variety of colors.  United Record Pressing is the only company that uses a split color press to make a 2-color vinyl record.  It takes about two weeks to make a sample pressing that is used for quality control audio purposes.  The sample is sent to the record label for approval, after which it may take another two weeks to complete the order.  The average pressing order is about 1,000 units, but sometimes the company will produce anywhere from 100-50,000 records.  Along with the vinyl, the company also creates and prints the center labels, jacket sleeves, and stickers found on the finished product. 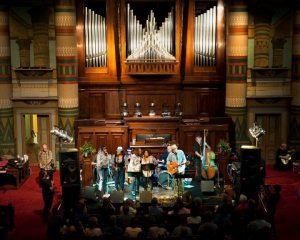 I needed a quick siesta and freshening as Phil Madeira was presenting Mercyland: Live at Downtown Church at the very historic and architectural treasured Downtown Presbyterian Church at six o’clock.  Performing in this hallowed space along with Madeira was Buddy Miller, The McCrary Sisters, The Wood Brothers, Shawn Mullins, Luther and Cody Dickinson, Kasey Chambers and Shane Nicholson, Matraca Berg, and Emmylou Harris.  Hard to imagine following that up, but we high-tailed it over to The Station Inn and their famous pizza for round two of evening showcases.  It was a ramblin’ evening with Amy Helm, Teresa Williams and Larry Campbell, and then all three performingas the Dirt Farmers.  Buddy Miller was in the audience, soaking it all in with the rest of us.  He made his way to the stage lending some guitar on the group’s final number.   Mary Gaither had the sandwich set before headliner Richard Thompson performed before a packed house playing solo acoustic. 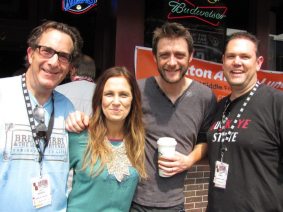 with Kasey, Shane, and Dale outside of Second Fiddle

Day three began with a breakfast trip to Star Bagel Cafe out in the Sylvan Park area.  From there, it was shopping day for the Ohio boys as we visited McKay’s and The Great Escape off I-40 west of downtown.  Unfortunately, the pickings were not as good as previous trips.  Before heading over to the “The Aussie Lunch” hosted by Mark and Jay O’Shea, we made the executive decision to bypass free pizza and dine next door at Jack’s  Bar-B-Que with some good ole Texas beef brisket, green beens, and mac & cheese washed down with Fat Tire Ale.  Back at The Second Fiddle we caught sets by Chris Altmann, Kasey Chambers & Shane Nicholson, Caitlin Harnett, Chris Pickering, Shandell and Felicity Urquhart.  My buddy Dale needed some new threads, so we went over to Trail West where he got sized up with a pair of Abilene boots and some pearl snap western shirts.  I also found a nice black Panhandle Slim shirt on sale to add to my wardrobe. 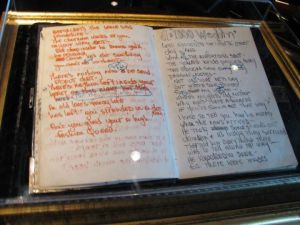 Another early evening out as tonight’s agenda included the very cool Gram Parsons Notebook Party beginning at five o’clock at The Hard Rock Café.  Attendees  not only were able to see the original notebook, enclosed in a glass case opened to “$1,000 Wedding”, but were able to view the hand written lyrics, drawings, journal entries, and set lists on several iPads passed around the room.  Both Jim Lauderdale and Brendan Benson took turns leading a guitar pull of artists through a slew of Gram songs including Suzanne Santo & Ben Jaffe of honeyhoney, Tim Easton, Kurtis Brothers, Brian Wright, and American Aquarium.  From there we decided to dine next door to The Rutledge, where we chose to spend the third night of showcases, at a little authentic restaurant called Fiesta Mexicana.  It was good, cheap, and served on extremely hot plates. We probably made a bad call on The Rutledge as Mandolin Orange was fair and The World Famous Headliners were unlistenable, but seeing the lovely Mindy Smith and a full set by the sweet trio that makes up Belle Star worthwhile.  Instead of closing out the night here, we ventured off-grid to see Scott Collins of The Smoking Flowers and The Buddies. We first met Scott last year at 3 Crows Bar and struck up a friendship and it just so happened that The Buddies were playing a gig at a place called the Zombie Shop two blocks away.  What we didn’t know is that we would be walking into motorcycle repair shop converted into a Nashville hipster speakeasy complete with television Duck Hunt, expanding arts lighting and props, and a fridge with two buck PBR’s.  With people throwing empty cans at his Chicago band mates and Smoking Flowers duet partner/wife Kim on drums, this was truly one night to remember by a couple of hooligans from Ohio.  Afterwards, we spent time catching up with Scott & Kim … and fostering friendships. 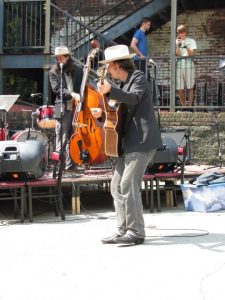 The Howling Brothers perform at Grimey’s

Round four started with a return to Fido and a yummy McFido bagel sandwich.  If you thought the other days were crazy, Saturday was going to be a living large marathon.  Our destination was Grimey’s New & Preloved Music for Americanarama V.  Inside it’s a storewide sale.  Outside, it’s a flea market of used records and CD’s, sampling complimentary Rompo Red Eye Ale from Jackalope Brewing Company, DJ’s spinning records, and food trucks selling delicious lunch fare. Oh yeah …Tift Merritt, Kim Richey, The Mastersons, Luella & The Sun, Amy Cook, Patrick Sweany, and The Howling Brothers all performed outdoors in the back parking lot on a gorgeous sunny day.  Stealing the show might have been Rayland Baxter, who not only was wearing a Goodyear baseball hat, but having his legendary Father Bucky Baxter playing pedal steel in his band.  My lunch pick was from the Smoke Et Al food truck that describes itself as “beyond barbeque” serving up a Brisket Baguette sandwich that was all that and more. 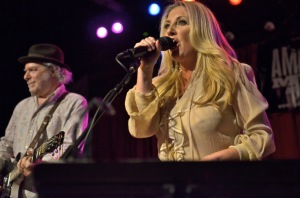 After a long day in the hot sun, it was time for a quick refresh and change into evening attire.  We headed out to east Nashville to meet up with former Clevelander and current Nashville Scene Managing Editor Jack Silverman and his lovely girlfriend Wendy Deason at a new restaurant called Lockeland Table.  Area chef Hal Holden-Bache has added a neighborhood gem and it was a wonderful setting to catch-up with another friend over fresh Carolina Mountain Trout with a maple bourbon glaze coupled with crispy prosciutto, sweet potato/sunchoke/apple hash and corn cream.  From there the final showcase pick was the Mercy Lounge which included Lera Lynn, Tift Merritt, and Buddy Miller with special guest Lee Ann Womack doing classic covers.  Also on the bill was a very cool band from Los Angeles called honeyhoney featuring Ben Jaffee and former Clevelander Suzanne Santo.    The evening once again formed new friendships as musician Alex Aronsten and his partner Kate Kennedy from Melbourne, Australia shared a table with us.  The pair were traveling through the United States and just happened to be passing through Nashville during the Americana festivities.  Not wishing to put an end to the dream, it was back to East Nashville for last call at 3 Crows Bar for a bushwhacker for my parched throat.

Morning came too early as we packed-up the car and went to the Athens Family Restaurant where our sweet waitress was struggling to wake up as well.  Heading home … thank you Nashville for another incredible Americana.

Part II will include more in-depth reporting on some of the new music performed or albums obtained in Nashville.