NEW MUSIC … and the rest of the Nashville journey 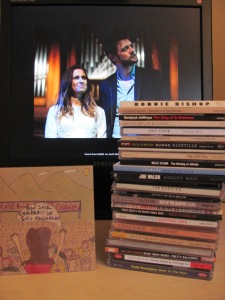 Ding, Ding … round two of mischief and discovery from the Americana Music Association (AMA) festivities.  When packing for Nashville, I take along a shopping list that is vital when searching for “gold” in the new and pre-loved music racks for gems impossible to acquire in Ohio.  My list tends to grow once I arrive after hearing artists perform new or soon-to-be released material at showcases that catch my attention.  Finally, there are those simple twists of fate when you cross paths and interact with people … in this case the songwriters … and the friendships which are fostered over the common thread of music. 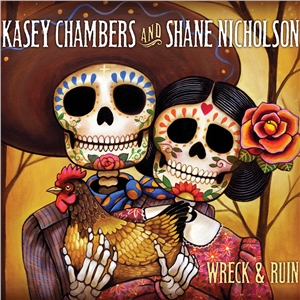 The expected highlight was finally seeing Kasey Chambers and Shane Nicholson.  The husband and wife duo had already returned to their home in Australia after a brief tour of the US, but was persuaded by AMA Executive Director Jed Hilly to return and be part of the festival.  Both artists have received high marks as individual performers as well as their first duet album Rattlin’ Bones released in 2008.  Chambers garnered my Album of The Year Award for Little Bird in 2011, so seeing them perform four times including sets at The Station Inn and The Second Fiddle made it a very special week.  Wreck and Ruin won’t be released in the US until October 23rd on the Sugarhill label, but we were treated to hearing cuts of the new album performed in a very intimate setting.  The husband and wife team were so at ease on stage together, it was a show within a show to see them interact and share family stories.  They had written most of the new songs in a remote cabin away from home in order to capture the right tone as songwriters instead of parents to three young children.  Songs like “’Til Death Do Us Part”, “The Quiet Life”, “Troubled Mind”, “Familiar Strangers”, “Have Mercy on Me”, and the title track offer great trade-off lead vocals and harmonies with an Appalachian flare.  My pre-order has already been placed for this one.

Another person on my wish list was seeing Amy Cook playing songs from her amazing new record Summer Skin.  On a beautiful sunny day only accompanied by a guitar, Cook played stripped down versions on the outdoor riser located in the back parking lot of Grimey’s New and Pre-Loved Music as part of their all-day Americanarama party.  The twelve track release was produced by Craig Street and included session work from David Garza and Chris Bruce (guitars), Me’Shell N’Degeocello (bass), and Jonathan Wilson (drums).  Cook’s voice shines on songs like the opening “Waiting 4 The World 2 End” and “Sun Setting Backwards” along with help from friends Patty Griffin and Robert Plant on the beautiful “Airplane Driver”.  Ben Kweller also adds vocals and the lone co-writing credit with Cook on the track “Getting To You”.  This Roothouse Records release promoted by All Eyes Media is sure to find a place on my year end list.

One of the nice surprises at Grimey’s was hearing a young man by the name of Rayland Baxter performing songs from his debut  feathers and fishHooks just released on ATO Records and promoted by Sacks and Co.  The son of Bucky Baxter, who has played pedal steel on recordings by Bob Dylan, Steve Earle, and Ryan Adams, Rayland has compiled a collection of songs that draw from roads traveled, lost love, and realizing “when you find the right river to float down, just keep floating”. Though growing up in a musical household, he didn’t pick-up a guitar until age 21; leading him to walk away from college and Tennessee.  Rayland spent time in Colorado playing open mics before going to Europe as a guitar tech for the band Moonshine Sessions.  After a soured love relationship in Paris, he landed at the home of one of his Father’s friends in Ashkelon, Israel for six months.  One night, he went outside to a barn with his guitar and later returned saying “I think I wrote a good one out there”.  The song, “the woman for me” is an aching folk tune found on the new album along with one about that girl “oLivia”.  The twelve song record was produced by Skylar Wilson and Eric Masse with Jacquire King mixing the beautiful, emotional compositions.  Rayland explains “When I sing, I don’t hold back.  I’ll cry on stage if I came to it.  It’s an emotional release for me.  It puts me at ease, and that’s what I hope it will do for those that listen.”  We might be listening to the younger Baxter sing for a long time to come, so jump on board and pick-up this outstanding album.

Another special performer at Grimey’s included Tift Merritt, who also played later in the evening at the Mercy Lounge showcase.  I first met the petite songwriter while assisting in promotions when she toured behind the classic Bramble Rose released in 2002 on Lost Highway Records.  Now ten years later, Merritt has once again written another gorgeous album titled Traveling Alone that should have long time fans excited again.  Merritt had lost weight and looked ageless as she performed new material and old favorites solo with her acoustic guitar. From the beautiful opening title track to the closing number “Marks”, the eleven songs produced by Tucker Martine and mixed by Ryan Freeland are simple, but powerful.  Some of my favorites include “Feeling of Beauty”, “To Myself” and “In The Way”.  It seemed ironic that as she walked out of the Mercy Lounge in the dark of night, she was carrying her guitars out to the car without anyone accompanying her.

There are times when the sun, moon, and stars align just right.  That’s how I happened to have a chance conversation with Bonnie Bishop while catching a bit of shade during the Americanarama festivities.  Little did I know that one of her songs, “Not ‘Cause I Wanted To” was recently recorded by Bonnie Raitt on her latest release Slipstream. She talked, and I listened, as she described the long recovery from a divorce, waiting to be uplifted before writing again, and finally finding the spiritual freedom to pen “good recovery” songs.  The results can be found on Bishop’s fifth release due out on October 9th titled Free that was self-produced.  The album was recorded and mixed by John Painter at IHOF Studio in Nashville with a crack band of Jimmy Wallace on keyboards, Steve Mackey on bass, Fred Eltringham on drums, along with Rob McNelley and Sam Hawksley on guitars.  Bishop’s powerful voice coupled with her deep, soulful, lyrics has some of that timelessness of those rock and roll queens who ruled radio thirty five years ago.  The new record comes out firing with the gospel backed chorus of “Keep Using Me” and bleeds into a funky “Shrinking Violet”.  Bishop’s pain can be felt as she sings her torch song “Best Songs Come From Broken Hearts” and let’s it all hang out on the rocker “Bad Seed”.  The beautiful ballad “World Like This” shows the raw emotion and redemptive spirit Bishop persevered through until finally landing on steady ground found in the last song “Right Where You Are”.  This album was one gift of music that will keep on giving every time I hear it.

Sigh … I have already added next year’s AMA conference dates of September 18-22 onto my Google calendar and will be counting the days until I return.